I love browsing in antique shops, and finding things that the mouselings would like. Recently I found this miniature antique drum and I had to buy it. I knew it wanted to belong to a mouse!

So here he is, my needle felted little drummer mouse.....and now we never get any peace. He never stops playing his drum! :)

He is looking for a home, so if you would like him to come and live with you, you can find his listing here in my Etsy shop:  Needle Felted Little Drummer Mouse By Mrs Plop's Shoppe 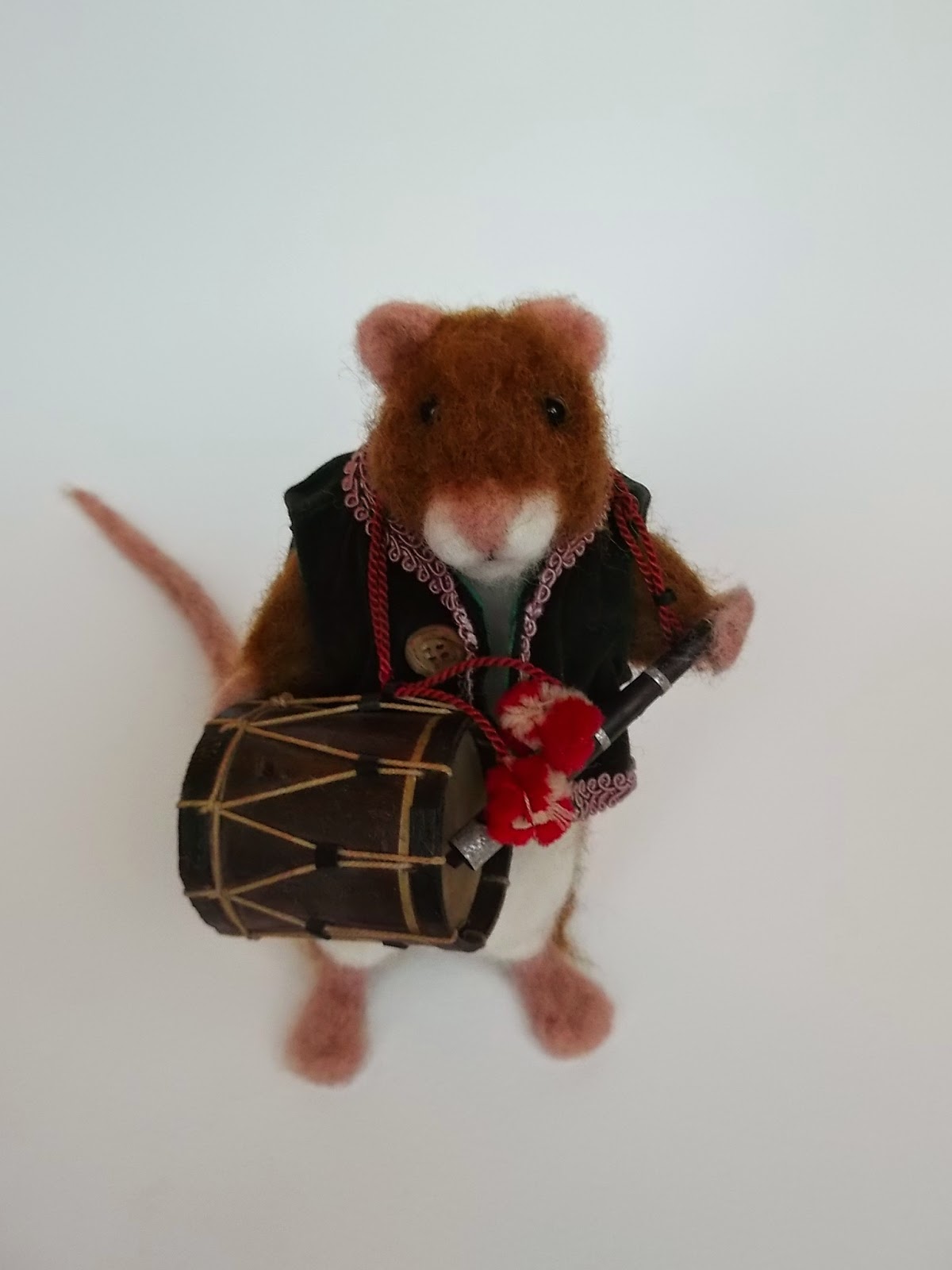 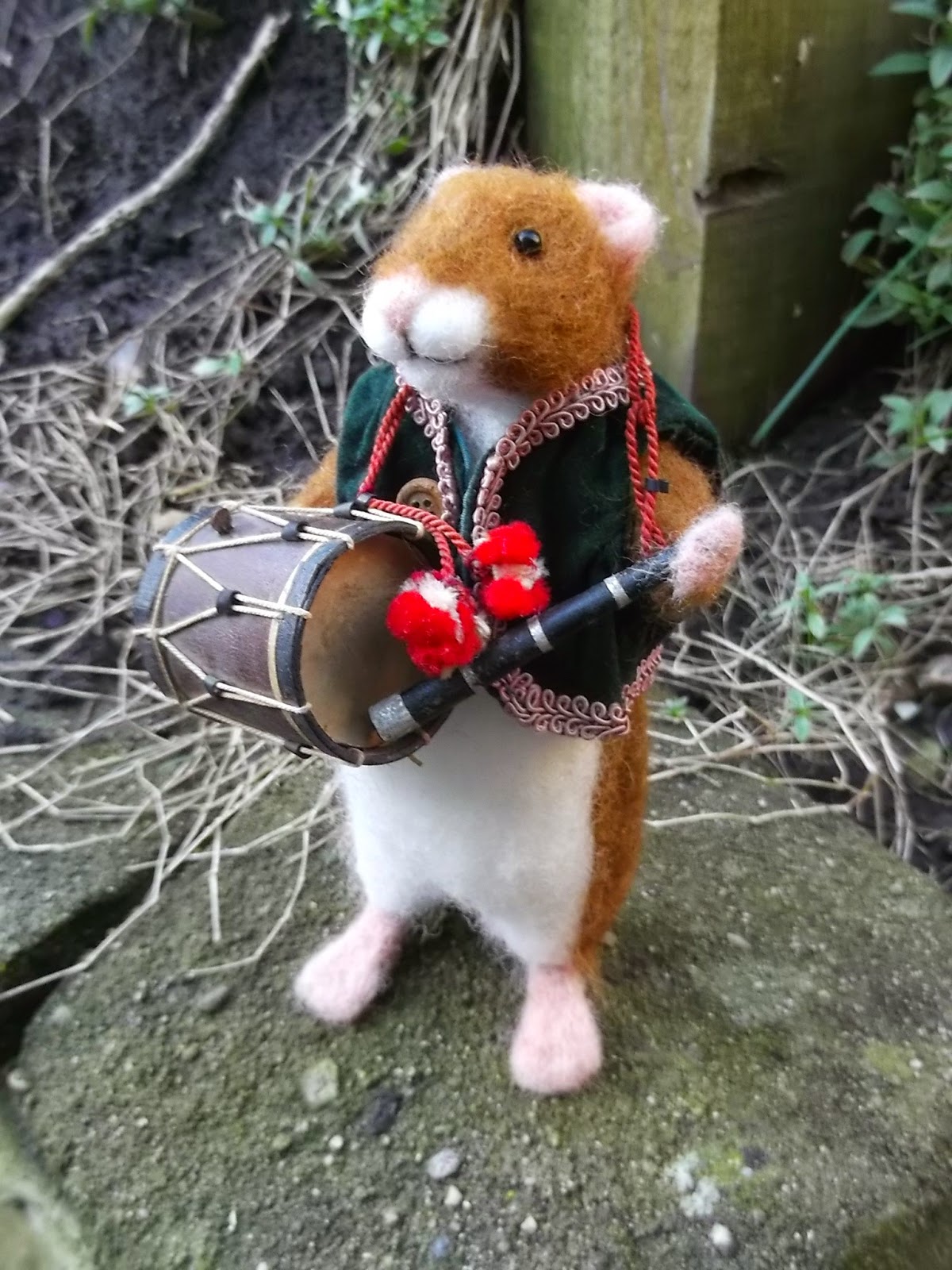 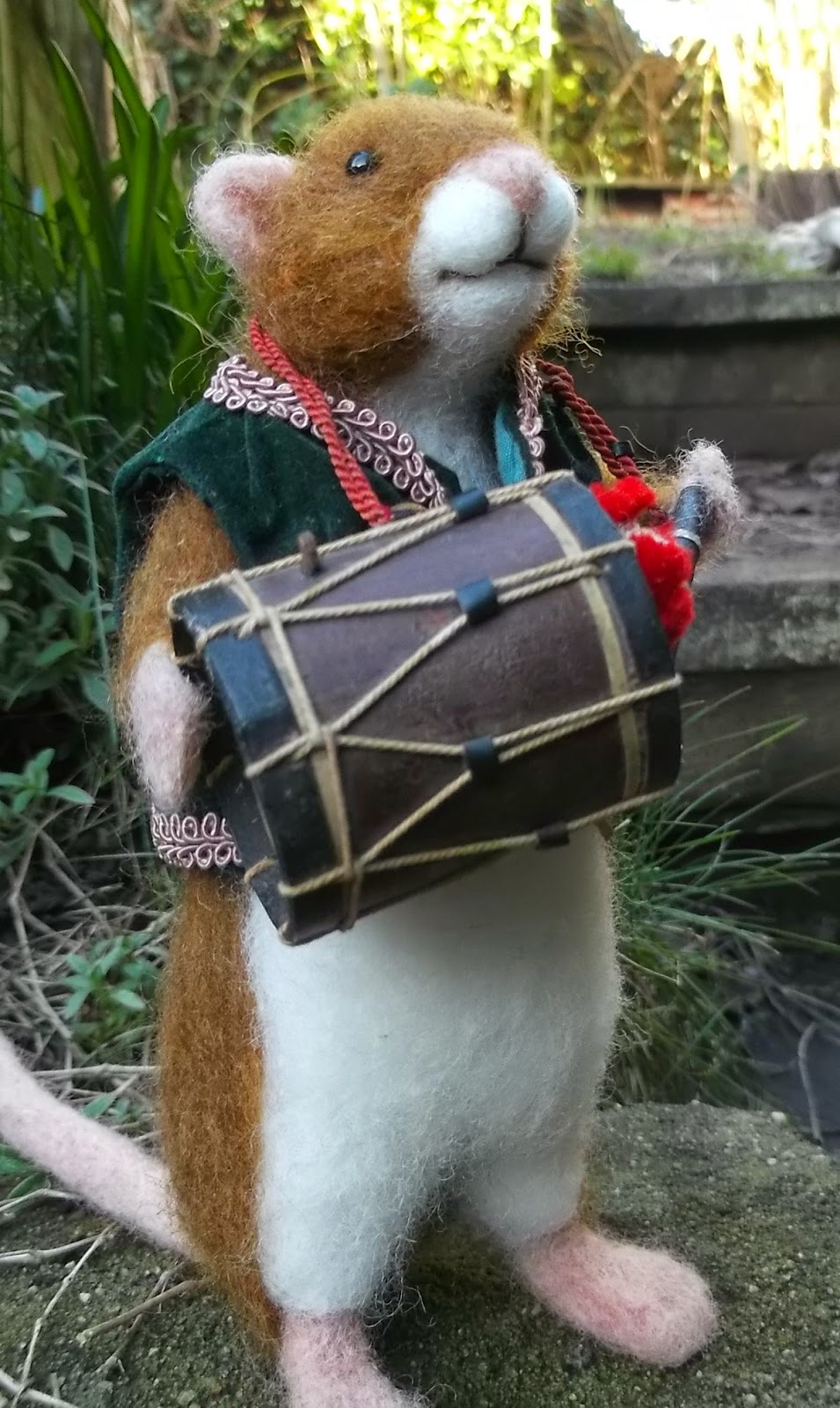 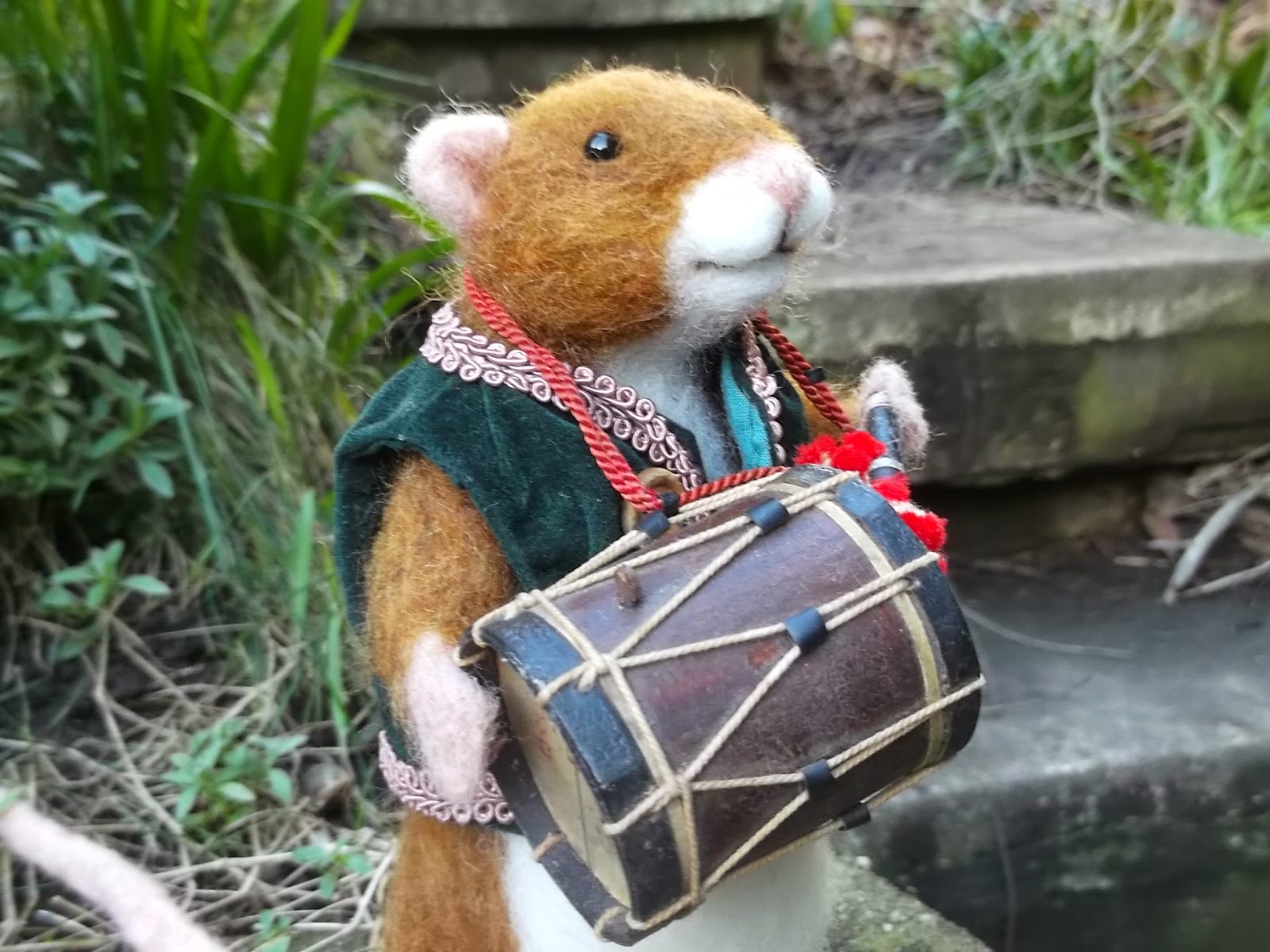 For the love of a rescued pony

This week I finally made a needle felted pony. I've been wanting to make one for such a long time, but orders, or domestic stuff or just life, kept getting in the way. I never set out to make anything for myself either, but I'm keeping this pony :) 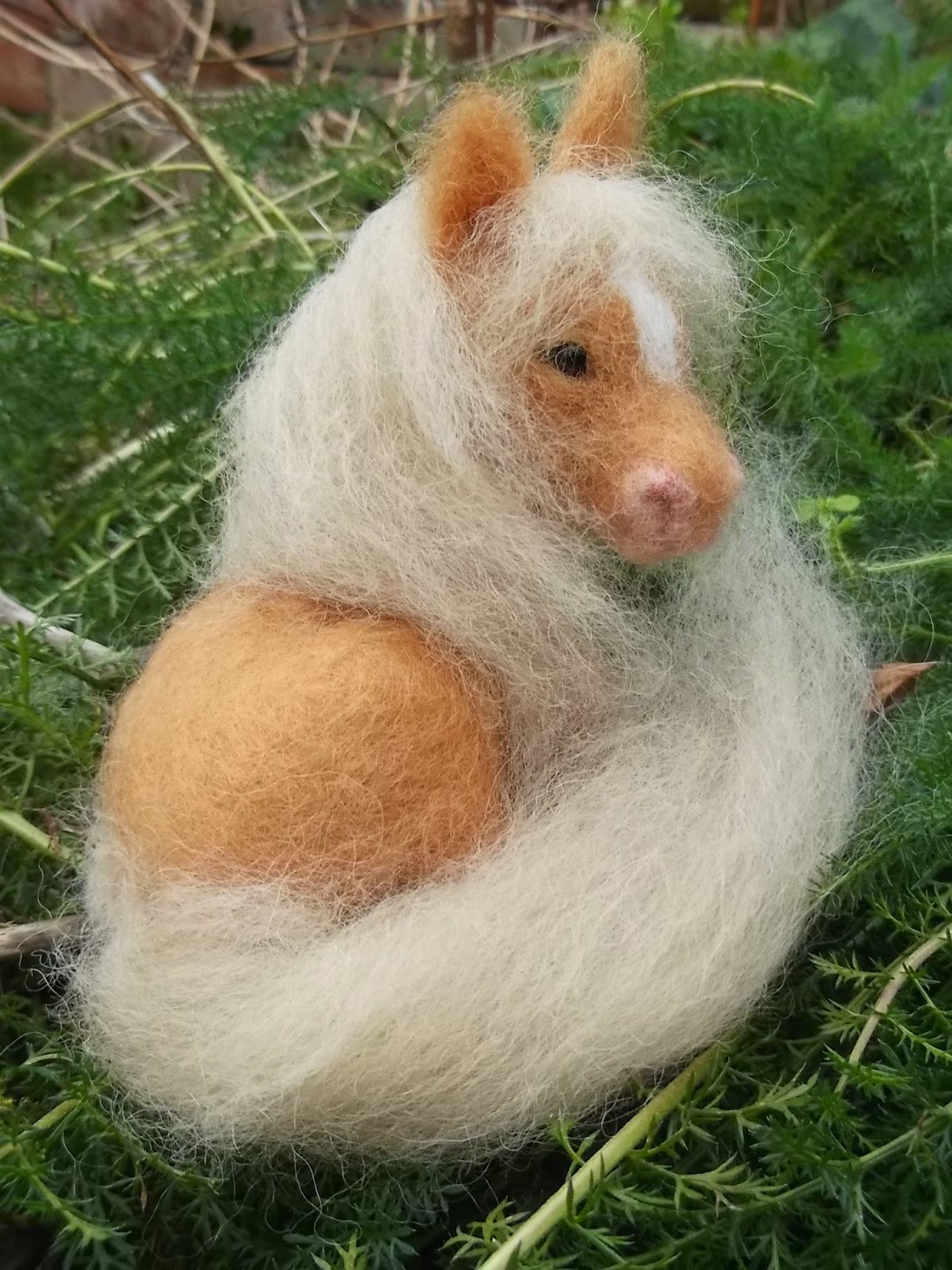 I've been crazy about horses ever since I can remember. I started riding lessons at aged 4 years old. I used to spend every weekend (days and nights) at a riding school in Hampshire, South England, where I would work my tiny 4 year old socks off in return for riding lessons. We had to get up at 5am and start working in the yard; Mucking out, feeding the horses, turning the horses out into the field, tacking them up ready for a lesson, sweeping the yard and so on. I was particularly teeny tiny when I was 4, much smaller than most of my friends, and I can remember hauling huge buckets of water from the water tap to the stables.

I must have looked so funny - this tiny little person, struggling with a ridiculously heavy bucket, trying not to spill any onto the yard, and dragging massive bales of hay and straw around. The woman who owned the riding stables, was a formidable woman. She was the type of horse woman who I later realised was much like a lot of no nonsense attitude horse women. If you fell off, (and boy did I fall off) you were to get straight back on, and never ever let a tear form in your eye. Unless your head had fallen off, she didn't 'do' compassion. Although, deep down she did, she really did. Under her harsh exterior was a woman who understood that this might seem tough, but it was perfect for children, to develop confidence and strength.

I loved my time there! Even though I was exhausted, I was in my element. And looking back, I realise now that this is one of the things that gave me so much of my inner strength, which I have really needed as the years have gone by! 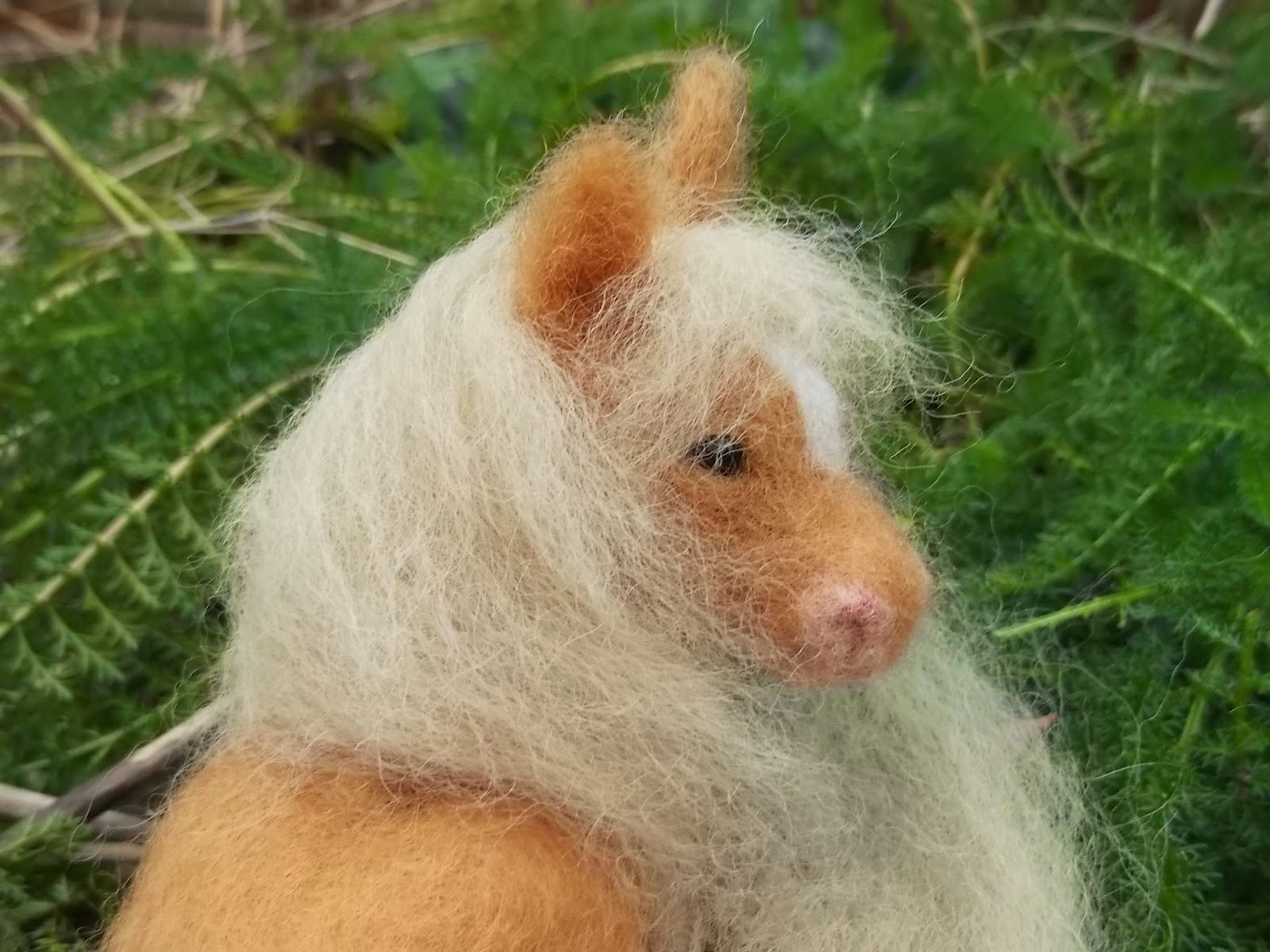 My love for horses just kept growing. I was lucky enough to have my first pony at the age of 11, and I became well and truly immersed in The Pony Club and all its various events.  At aged 14, an interest in boys took over for a bit, until I realised they were really quite dull, and ponies were much better bet as companions :D

But a long period of living in London, meant that I couldn't have a horse, or even be near horses. I suddenly came to the realisation that I hated London and what on earth was I doing there? In this expensive and cold city, with no horses in sight?!

I moved to the westcountry, where I met my husband, and finally after a few more years, I kind of hinted blatantly that I might want another horse again. Well, actually, what I said was: I'm getting a horse. And that was it! There wasn't a lot the poor man could do about it :D

That was when Candy, a beautiful Palomino pony, came into my life. Anyone who follows my blog, or facebook page, may already know that my nickname for Candy was Mrs Plop. Hence my shop name 'Mrs Plop's Shoppe' As my beautiful girl is no longer with us :( So my shop name is in her memory. 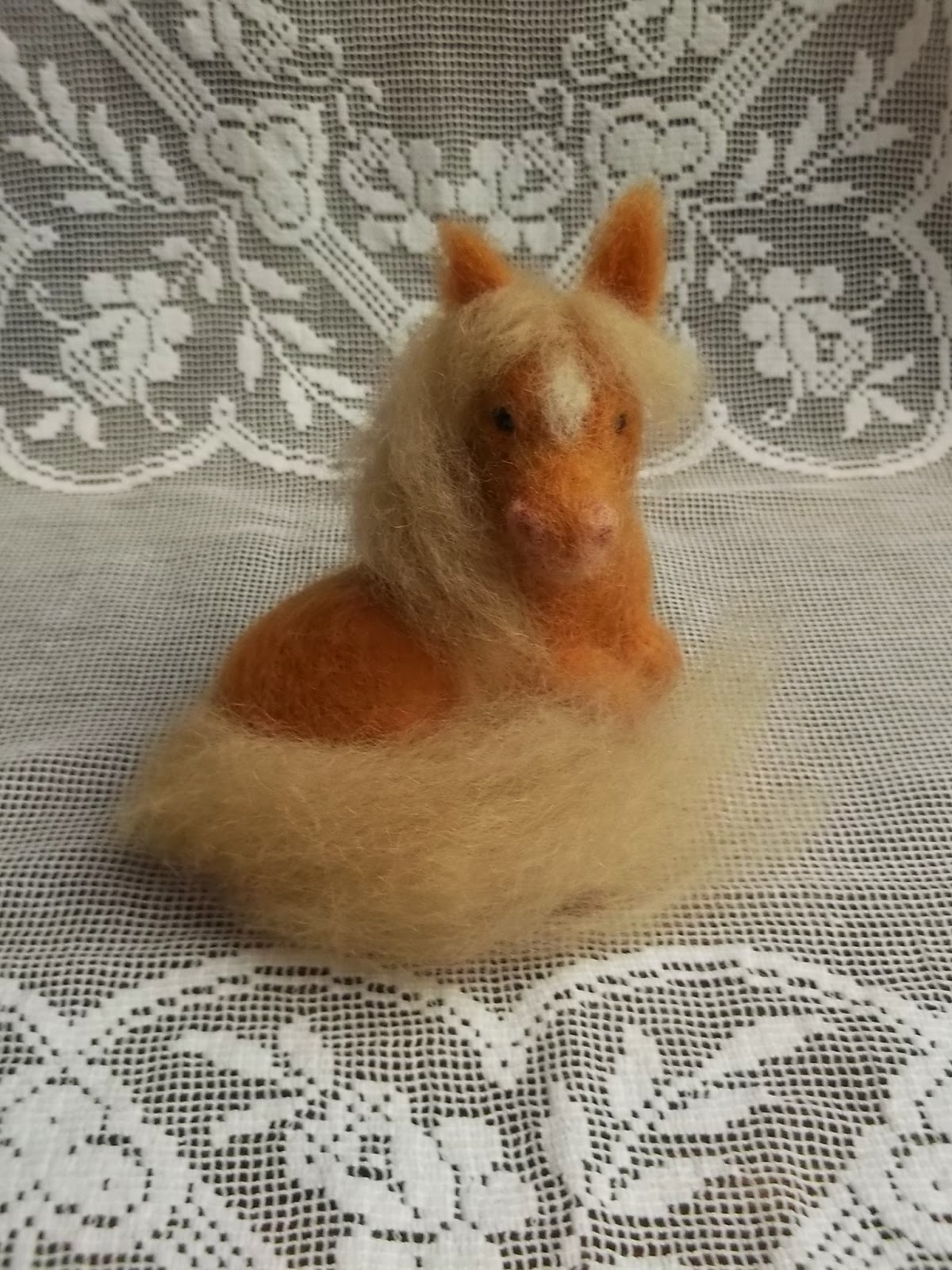 Candy's owner didn't care about her. She was kept on a tiny patch of land on a housing estate, on the outskirts of a city. I am so thankful that I found her, as she was due to go to a slaughterhouse. So I took her home. Her owner just couldn't be bothered with her, she neglected her, and treated her very badly. She just 'wanted rid' of Candy, who she so wrongly just saw as 'a problem'

When people mistreat horses, and if it is bad enough, they will just 'shut down' emotionally. And this is what Candy had done. She had suffered so much, that she simply saw no reason why she should ever trust anyone again. She also, unsurprisingly, became very defensive. My husband found that out the hard way when he approached her in the wrong way and received a huge kick in the chest from her. He could see through all of that behaviour though, and he adored her, just as I did. (Don't worry, he was ok! The kick hurt, but she didn't do any damage!)

I kept Candy in her stable for a while after she arrived for the necessary veterinary treatment, worming, and dental treatment that she needed. When I did turn her out into the field, she firmly kept her distance. Everyone at the stable yard where I kept Candy thought it was hilariously funny that I had brought this pony to the yard. A pony that wanted nothing to do with anyone. They laughed even more when instead of trying to catch her, I just sat in her field with her, reading a book. "You'll never catch her like that!" They used to laughingly shout over to me as they rode past the field on their horses. I would just feign a smile and inwardly I'd say 'you'll see!'

Their idea of catching a 'difficult horse' was to corner it, to trap it. It was a totally different way of thinking to mine, and I saw no sense in it whatsoever. And I wasn't ever going to make Candy feel trapped! I knew that she would come to me in her own time, and that when she did, it was going to be her decision, her will, and because of that, there would never be an issue with bringing her in from the field again, because she would want to come in, not because I was forcing her! I am still horrified that the old adage of 'show your horse who's boss' still carries any weight at all in our modern world. I am no Monty Roberts, but to me, it is completely obvious! Be strong for your horse, so that he/she can trust you, and want to be with you. But be kind! Don't ever force, hit or bully your horse! Never! And yet, so many people still do. It's a no-brainer!

Anyway, back to my story. So, week after week I sat with Candy in the field, just reading. It looked, to an outsider, as though she was taking no notice whatsover of my presence, but I knew she was. And one day, she did come over to me. I had carrots waiting. She took them, and the very next day she followed me to the gate, and I took her into her stable, fed her in her stable, groomed her, and turned her straight back out again. After that, she always came running across the field to greet me, and there followed a relationship that I will treasure for the rest of my life. Love, Mrs Plop xxx 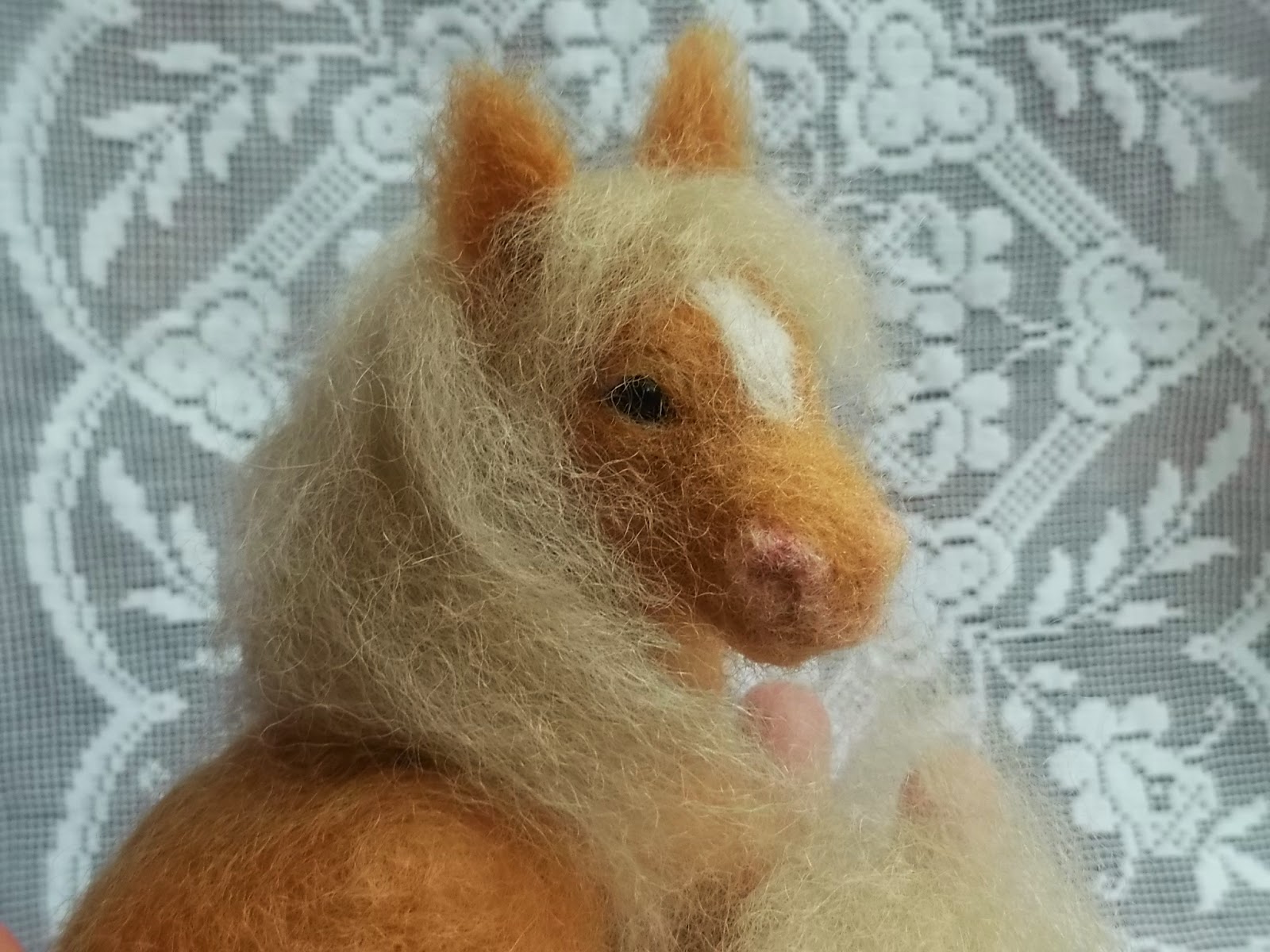 Custom made miniature needle felted ponies are available in my Etsy shop in any colour combination. Just send me a message to let me know what colours you would like :)
Custom Made Needle Felted Pony By Mrs Plop's Shoppe